The state government last night released a statement barring residents from engaging in any peaceful protest. According to the statement, the Federal government has disbanded SARS hence no need for the protest. The statement adds that anyone who participates in any protest will be made to face the law. Read here.

Genevieve disagrees with the governor’s decision and has taken to Twitter to knock him. She wrote

”Your mustache says it all. You could have chosen to be any kind of leader you wanted. You chose to be a dictator. Do you have children? That’s a shame. LEADERS WILL BE HELD ACCOUNTABLE for every loss of innocent life in their State. #ENDSARSOPPRESSION #EndSarsNow” 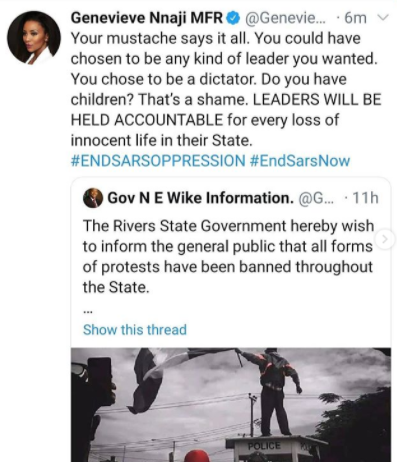 #EndSARS protest: Man who recorded a video of Ajuwon policemen assaulting a Sports journalist has allegedly been arrested

”Crime Is Crime”; Leave BNI To Deal With ‘NDC Man of God’

Drama As Man Jumps Inside Digged Grave, Vows Not to Stand Up Until His Payment Is Made In Full