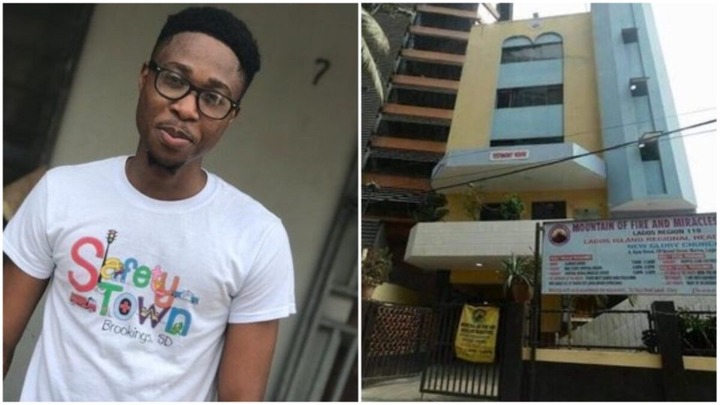 – The man said that even after he had informed them that he was a first-timer and decided to stay for their vigil after being in an earlier mid-week service, they never listened to him

A Nigerian man with the Twitter handle @VictorIsrael_ has spoken about his experience at a Lagos branch of Mountain of Fire (MFM) in 2017.

He said it all started after his tailor disappointed him around Mandillas Lagos Island. Feeling bad and hurt from the experience, he headed home.

On his way home, he noticed the branch of the church and decided to worship with them after hearing a worship song that spoke to him.

The man said when he was about leaving the church, he heard an announcement asking members to come back for its vigil by 12 midnight.

@VicorIsrael_ said that he thought it a good idea to stay back for the midnight service then go back to his tailor the next day in the morning.

After informing one of the pastors about his decision to stay for the service, he was encouraged to do so.

Events, however, turned badly for him at midnight when he was told that he could not attend the vigil because it was meant to for church workers.

Later in the night, he said some pastors of the church kicked him off sleep and asked him to leave. According to him, all his pleas fell on deaf hears even when he explained to them that there was no place for him to go and he was initially encouraged to stay and attend.

He said he could have gotten robbed or killed at that time of the night, adding that church should be the place to offer shelter after everywhere else failed.

Meanwhile, Bioreports earlier reported that the MFM on Sunday, January 26, debunked reports which claimed that the church has the highest number of single ladies among all churches in Nigeria.

The church said contrary to the report it conducted over 150,000 weddings through its singles ministry, GEN 218, in the last decade.

A statement by the MFM spokesperson, Collins Edomaruse, said the weddings have been conducted based on the scripture in Genesis 2:18 which states “It is not good for the man to be alone. I will make a helper who is just right for him”.

Edomaruse while quoting the pastor‎ in charge of the programme, Pastor Popoola, said the GEN 218 offers training, teaching, and guidance for bachelors and spinsters within the fold.

Church worker reveals why she wants to enter BBBioreports | Bioreports