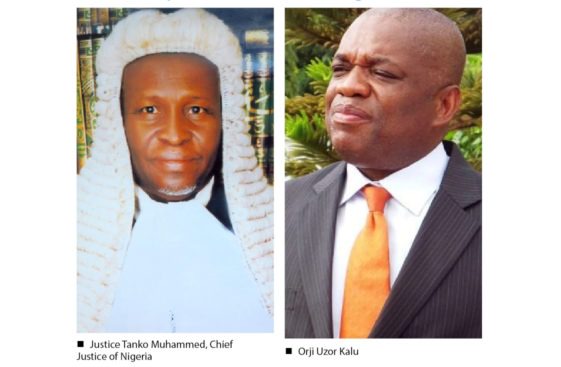 The judgment of the Supreme Court which nullified the conviction of a former Governor of Abia State and serving Senator, Orji Uzor Kalu, and his subsequent application seeking to be released from detention have continued to elicit reactions from senior lawyers.

Although some lawyers have expressed concern that the judgement was a setback to criminal justice administration, one of his lawyers, Awa Kalu (SAN), said Kalu was a free man, explaining that, “There is no basis to continue to hold Kalu in custody. The natural consequence of the judgment of the Supreme Court is that in the eyes of the law he was never convicted.”

In the latest application before the Federal High Court in Lagos dated May 12, 2020, Orji Kalu is seeking an order setting aside the judgment of the court on December 5, 2019, by Justice Mohammed Idris convicting and sentencing him to 12 years imprisonment in a 39-count charge of money laundering to the tune of N7.6bn.

Orji Kalu also asked the court to set aside each of the 39 charges contained in charge number: FHC/ABJ/CR/56/2007- based on “the sentences having been imposed without jurisdiction.”

Orji Kalu also requested that the court made an order directing his release “forthwith from the custody of the Nigerian Correctional Service, Kuje-Abuja, FCT.”

Lawyers to the Senator representing Abia North on the platform of the APC, Lateef Fagbemi (SAN) and Awa Kalu (SAN), filed the application after it became clear that he would not be released from custody alongside his co-defendant, Ude Jones Udeogu, after the Supreme Court nullified their trial and conviction.

In the majority judgment read by Justice Ejembi Eko on May 8, 2020, the five-member panel of the apex court declared unconstitutional the provision of Section 396(7) of the Administration of Criminal Justice Act (2015) upon which the then President of the Court of Appeal, Justice Zainab Bulkachuwa, relied on to authorise Justice Idris to return to the High Court to conclude the trial.

Justice Eko held that, “I have no doubt, whatsoever, that the Hon. M. B. Idris (JCA), having been elevated to the Court of Appeal, had ceased to be a judge of the Federal High Court.”

“Accordingly, he had been deprived of whatever jurisdiction he had as a judge of the Federal High Court to proceed in the case ‘to conclude the hearing and ultimate determination’ of the part-heard criminal case No: FHC/ ABJ/CR/56/07 – Federal Republic of Nigeria vs Orji Uzor Kalu & Others.”

However, a major twist unfolded when Orji Kalu’s lawyers went to sign the warrant of release to be attached to the judgment and shown to officials of the Nigerian Correctional Service in Kuje. Supreme Court clerks went through the judgement and noted clearly that Orji Kalu who was not an applicant in the matter was not covered by the order of the panel.

The clerks pointed out that the intention of the panel as read out by Justice Eko was that, “The judgement of the Court of Appeal No: CA/L/1064C/2018, delivered on 24th April, 2019, particularly in respect of the appellant and as it affected him is hereby set aside.” Thus, only Udeogu was released.

Subsequently, Orji Kalu, in the application told the high court that he was sure Justice Idris was out of jurisdiction when he was elevated to the Court of Appeal on June 20, 2018, as he lost his position on the bench of the Federal High Court when he subscribed to the Oath of Allegiance on June 22, 2018, and that he filed a no-case submission challenging this, which the judge overruled, thereby leading to further appeals.

“That by a fiat dated the 2nd day of July, 2018, issued under the hand of the President of the Court of Appeal, His Lordship, Hon. Justice M. B. Idris (JCA), of the Court of Appeal, was directed to return to the Federal High Court to conclude the trial, then part-heard in charge No: FHC/ABJ/CR/56/2007 – Federal Republic of Nigeria vs Orji Uzor Kalu & 2 Others.

“That upon the return of Hon. Justice M. B. Idris (JCA), for the purpose of continuing and concluding the trial, His Lordship overruled the no case submission filed by the Applicant as well as the 2nd and 3rd Respondents (Udeogu and Slok Nigeria Ltd) whereupon an appeal was filed at the Court of Appeal, Lagos division challenging the ruling on the no case submission as well as the competence of Hon. Justice M. B. Idris, JCA, to continue to hear the matter.

“That the Court of Appeal heard arguments in the appeal on the 7th February, 2019 and on the 24th April, 2019, the Court of Appeal, dismissed the appeal on account of which the 2nd Respondent (Udeogu) lodged a further appeal to the Supreme Court which said appeal was heard and determined as Appeal No. SC.622C/2019- Udeh Jones Udeogu V. Federal Republic of Nigeria & 2 Ors.”

The Chairman of the Presidential Advisory Committee Against Corruption (PACAC), Prof. Itse Sagay (SAN), said the judgment of the Supreme Court nullifying Section 396(7) was a setback and a disservice to the Administration of Criminal Justice Act (ACJA) signed in 2015, adding that no section of the Nigerian Constitution (1999) barred a judge elevated to a higher court from returning to conclude part-heard cases.

Prof. Sagay said, “We found, in many cases, judges had spent five to seven years on a case, they were promoted and they could not continue with it. A new judge would start and the case would begin all over again. It was killing our judicial system. That was why the National Assembly passed that law under the ACJA.”

In the same vein, Kemi Pinhero (SAN) said he felt sad that the apex court failed to see the mischief by parties in criminal cases; who always found a way to delay or get a trial to start afresh, which the provision of Section 396(7) of the ACJA sought to cure.

Pinhero said, “Sadly, in construing the provisions of Section 396(7) of the ACJA, the Supreme Court failed to take cognizance of the mischief intended to be cured and merely viewed the issue from the narrow compass of an attempt to avoid the implication of the previous interpretation of the constitution by the court.

“In fact, the Supreme Court failed to consider in the entire judgment why the provision was introduced, but held itself bound to only the letters of the law. This approach, in my view, has occasioned injustice to the prosecution.

“It is my submission that what the Supreme Court should have done in the circumstances is to adopt a purposive approach in its interpretative role by taking into cognizance the fact that the constitution as at the time it was made could not have envisaged the current situation in terms of the level of corrupt practices and delay in the administration of criminal justice, thus the interpretation given to the provision of the 1979 Constitution in the previous cases of Ogbunniya and Our Line Limited’s case which was influenced by the prevailing circumstances at that time ought to have been distinguished as rightly done in my view by Hon. Justice Idris.”

But other lawyers such as Adeniyi Akintola (SAN) and Yunus Ustaz Usman (SAN) said the cure for the wrongs in the administration of justice could not be made using another wrong.

Akintola said, “I have been among those warning that most of the provisions of the ACJA cannot stand the test of the constitution.

“There was a case involving a chief magistrate in Oyo State who was elevated to the High Court of the FCT. He came back to deliver judgement in the magistrates’ court and the Supreme Court set aside the judgement. So, it is not new, it has always been there in our jurisprudence.”

On whether Kalu should have benefitted from the earlier judgment of the Supreme Court, having been involved in a joint trial with the appellant, Barr. Oyeghe Seprebo advised Kalu to wait till the hearing of his pending appeal at the Court of Appeal to make the application for his release.

Seprebo said, “Both the appeal and the decision did not appear to affect Orji Uzor Kalu, hence one would think that his conviction stands pending when his appeal is decided. Otherwise it will not be different from a situation whereby a judgement is being enforced against a person who is not a party to a proceeding.”

He added that, “The wordings of the judgement are very clear and unambiguous. If the apex court wanted the decision to affect all defendants, they would have couched it so expressly. Now assuming the order of the court was that this appeal is frivolous, baseless and lacking in merit, order of N100m awarded against the appellant, can the order be enforced against other respondents who were defendants but did not appeal? Certainly no.”

Coronavirus is hitting USA so bad as they have the highest number of cases: see the number and death