Video: CCC member ties son in sacks, locked him inside wardrobe for four days as punishment for stealing 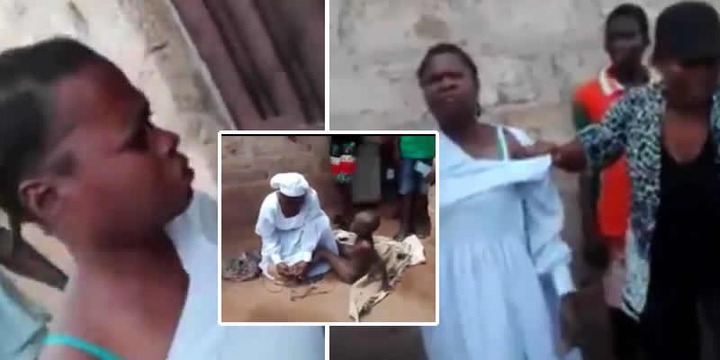 The Police in Osun State have arrested a member of a White Garment church, simply identified as Iya Ayo, for allegedly locking up her son in a wardrobe for four days.

WuzupNigeria gathered that Iya Ayo tied the son inside four sacks before dumping him in the wardrobe.

The woman reportedly subjected the boy, who is about 10 years old, to punishment for constantly stealing and for being possessed by an evil spirit.

The boy was, however, rescued when a neighbour heard him crying for help and drew the attention of residents of the area to the house where he was kept.

The Chairman, Fesojaye Community Landlords Association, Sakiru Gbadegesin, explained that the mother was in church on Sunday when the boy was rescued.

Gbadegesin said the woman told them that she tied the boy up in sacks and kept him in the wardrobe since Thursday, because of his wayward acts.

“We don’t know much about the woman and her family. But on Sunday, around 11am, I was informed that she kept her son in the wardrobe to punish him for his wayward life. I told those who brought the matter to me to report it to the police.

“Later, policemen from the Oke Baale Police Station, Osogbo, came and the woman was forced to open the door and the boy was brought out from the wardrobe. He was almost dead.

“She confessed that she tied the boy in three sacks and kept him in the wardrobe since Thursday, because he was wayward and used to steal.

“A neighbour of the woman, who was fumigating the surroundings of her house, heard the boy’s cry for help and informed us. As of the time, the mother was in church. She attends a Celestial Church of Christ. The woman was later arrested and taken to the Oke Baale Police Station.”

In footages of the incident made available to our correspondent, the emaciated boy was given a tin of milk, while a woman held his mother to prevent her from running away.

When contacted, the Police Public Relations Officer in the state, Yemisi Opalola, pleaded for time to investigate the matter and call back.

She had yet to get back to our correspondent as of the time of filing this report.

Confirming the incident, the spokesperson of the state police command, DSP Yemisi Opalola, said the woman was arrested and made to sign an undertaking never to maltreat the child. Opalola said efforts are being made to search for the father of the child so the woman can hand Ayo over to him. She added that the police are closely monitoring the situation.

”We went to arrest her and she told her part of the story, how the boy has been disturbing her. In a nutshell, the police told her to go and look for the father of the boy if she cannot take care of the child again. She promised to do so. The DPO also followed up yesterday to ensured that the father is found.

“There is no way the police can keep the child with them. They have made her to write an undertaking even with a surety who promised she will never do it again, she said.

Watch video from the scene of rescue;

US, Russian troops square off in northeast Syria as Kremlin eyes wider footprint