These two great musicians are a force to reckon with when it comes to fuji music. Pasuma wonder and Saheed Osupa.

Pasuma wonder has been hailed for adding hiphop to his style of fuji music while Saheed Osupa on his own part promotes yoruba cultural values through his music.

Wasiu Alabi, born on November 27, 1967, also known as “Oganla”, is a Nigerian film actor and Fuji musician. … Later, he was brought up in Kwara State, western Nigeria. In 1973, Pasuma entered Muslim Mission Primary School, and 6 years later he moved to Nigerian Model High School to pursue his secondary school education.

While,king doctor Saheed Osupa was born in 1969 in Ibadan. The musician has 2 wives and children. He obtained his primary and secondary school education in Lagos (he finished in 1987). He studied Business Administration at Ibadan polytechnic of Ibadan for 3 years. 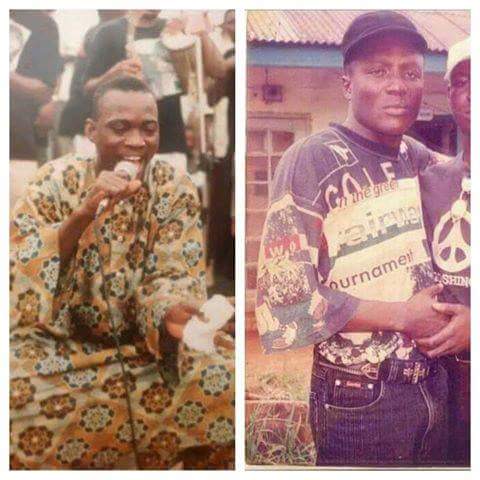 Its throw back both and the popular nollywood actors and yoruba musician share an epic throwback pictures of themselves. Pasuma and Saheed Osupa surely looked funny. Fame has made them grow and look astonishing over the years. The fuji musicians who later ventured into acting, has acquired not only fame but wealth and love from Nigerians. They are highly respected in both the movie industry and music industry.

Their story also tells us that we make it irrespective of our humble beginning. Stay focus you will also get there.